Here is the Last Entry from the Family Page of the CaringBridge website that was setup so friends and family could follow her progress after she fell:

Maxine Corrine Fish was the only daughter born to Dr. J William Fish and Nellie L Fish in Decatur Illinois. She and her brother, William, were later joined by brothers John and Lance.

Maxine finished her formal schooling in the public schools in Decatur before pursuing a BS in Biology at Millikin University in Decatur. It was at Pittsburg State University (Kansas State Teachers College) as a graduate instructor in Biology that she met Don. Don and Maxine were married on March 21, 1953.

Maxine graduated in 1953 with a Ph.D. in Botany from Kansas State University in Manhattan Kansas, and took a job teaching Biology at Central College in Pella Iowa. During Maxine’s initial teaching at Central, Don was pursuing a Ph.D. in Plant Pathology at Iowa State University. Upon Don’s completion of his Ph.D. in 1955, Don and Maxine looked to find a job to teach biology together, but President VanderLugt talked Maxine into pursuing a second doctorate in English. Maxine and Don spent two years in New York City at Columbia University as Maxine completed doctoral work for an Ed.D. in English. She returned to Central to teach English for the remainder of her career, serving 43 teaching years at Central College until her retirement in 1996.

In 1971, they adopted a one year old daughter, Kimberley, who was born in South Korea. She was joined in 1975 by a brother, James, also adopted from South Korea.

Maxine and Don traveled extensively throughout the United States, Central America and Europe in the early years of their marriage. They were an integral part in starting the Central College Abroad programs in Merida Yucatan, Mexico and in Hangzhou, China.

In the years following their retirement, Maxine and Don became involved with writing and editing text books for use in universities in China. The most recent book, Inside US Culture and Life, is a compilation of blogs written by Maxine and Don, (with help from family and friends) and was published in China in November.

In 2008, Don and Maxine were both conferred Doctor of Humane Letters by Central College.

On Wednesday, February 3, Maxine passed away at the Comfort House of Pella. She had formerly been a patient at the Skilled Care Unit of the Pella Regional Health Center for four weeks.

She was preceded in death by her parents, Dr. J William Fish and Nellie L Fish and her brother William.

Maxine is survived by her husband Don and daughter Kimberley, both of Pella, a son, James, of Pleasant Hill, and granddaughter, Cassandra and her mother Laura, of Bettendorf; a sister-in-law, Beverly, of Rochester, Indiana and her family; a brother, John, of Raleigh, North Carolina and his family and a brother, Lance, of Des Moines Iowa and his family as well as many Huffman brothers and sisters-in-law, nieces and nephews.

She also leaves countless friends and colleagues both in Pella and all over the world, former students, numerous Chinese “daughters”, as well as an honorary daughter, Dr. Yewoubdar Beyene, of San Francisco,California, and an honorary granddaughter, Kathy Li, of Pensacola, Florida.

Maxine enjoyed knitting, reading, crossword puzzles and finding an opportunity to teach at any given moment!

We welcome you to join us
at an informal Memorial Gathering
Sunday, February 28
from 2:00-5:00p.m. (open house)
at the Central College Graham Conference Center
(The old dining hall for Central grads of earlier years). 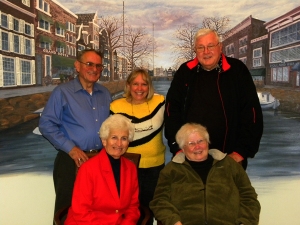 An after dinner photo from last Fall in Pella, IA, with favorite people Barbara Butler, Maxine and Don Huffman

This site uses Akismet to reduce spam. Learn how your comment data is processed.